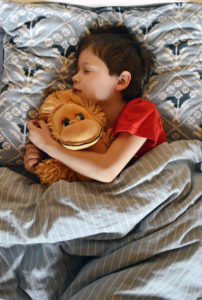 There is an abundance of evidence pointing to the importance of sleep for our overall health and well-being. While lack of sleep has been linked to mental health disorders, there are several outstanding questions regarding the specific relationships between sleep and psychiatric diseases.

One new study, published in JAMA Psychiatry, has helped to clarify some aspects of how sleep can affect our mental health. Specifically, this new study has shown that sleep problems in childhood can increase the risk for  psychosis and borderline personality disorder  in adolescence.

This study involved analyzing data from nearly 14,000 participants for whom longitudinal data over more than 13 years were available. Sleep information was reported by parents and included data on the regularity of children’s sleep routines, how long children slept each night, how frequently children awoke in the night, and children’s bedtimes at various ages ranging from infancy to nearly 6 years old.

Of the 13,488 study participants, 7.155 reported psychotic symptoms, and 6.333 reported symptoms of borderline personality disorder. Those who had irregular sleep routines at the ages of 6 months and 2.5 years were more likely to suffer psychotic experiences in adolescence, as were those who woke up more frequently in the night at the age of 1.5 years.

While much more data are needed to understand the specific role of sleep in the development of mental health disorders like psychosis and personality disorders – and particularly in how different metrics of sleep quality may relate to mental health risks – these data corroborate the importance of sleep in mental health. Additional research in this area can help pediatricians, family physicians, and parents identify children as risk for mental health challenges.