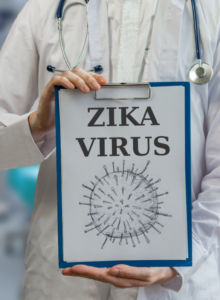 Zika virus has recently been overshadowed by COVID-19, but it was the virus many people had their eye on before the pandemic. The virus, which is spread via mosquito bites, has been described as causing symptoms that are reminiscent of – but milder than – those that occur with dengue fever. Like dengue fever, Zika virus is classified as a flavivirus.

Dengue fever is known to pose an enhanced risk of severe illness in those who have previously suffered an infection with a different serotype. Given the similarities between Zika virus and dengue fever, scientists have speculated that infection with Zika may similarly increase the risk of becoming severely ill when subsequently infected with the virus causing dengue fever.

To test this theory, researchers have conducted an investigation on children in Nicaragua who suffered these infections. The results showed that, like with dengue fever, one previous Zika infection elevated the risk for severe illness when people were later infected with the virus causing dengue fever.

According to the authors, these data, while important for clarifying realities of these related viruses, complicate the picture when it comes to vaccine development. The only dengue vaccine that is currently licensed is known to enhance the risk of severe illness in those who have never been infected with dengue. These new results, published in Science, highlight the potential for a Zika vaccine to suffer similar limitations.

As the experts note, it will be important to continue to conduct research on the relationship between these different flaviviruses to understand the implications of previous infection on future risk as well as to best deploy strategies for safe and effective vaccines. Differences in how infections with certain serotypes influence experiences with future infections of different serotypes will also be critical for developing a comprehensive  picture of the interplay of these viruses.