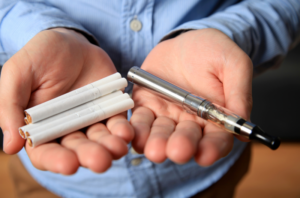 Since the rise in popularity of e-cigarettes, there has been significant debate amongst physicians and scientists about the potential advantages and disadvantages of smoking e-cigarettes, particularly when compared to effects of smoking real cigarettes. Though not approved as a method for quitting smoking, e-cigarettes have been anecdotally linked to successful smoking cessation.

A new study published in JAMA Network Open investigated this very question and has helped to shed light on the potential role of e-cigarettes in quitting cigarette smoking. For the study, the researchers investigated people who had quit smoking cigarettes and compared those who remained tobacco free and those who switched to another tobacco product, such as e-cigarettes.

The researchers found that over the 13,604 study participants, more than 9% had recently quit smoking cigarettes. About 63% of the group who had quit smoking had remained tobacco free at the time of the study. However, nearly 23% had switched their habit to smoking e-cigarettes. Nearly 1 in 5 of those smoking e-cigarettes smoked them daily. Another 14% had switched to a different tobacco product.

Their analysis showed that those who switched from traditional cigarettes to another tobacco products were more likely to relapse and begin smoking cigarettes again than were those who remained tobacco free. However, this group was also likely to requit and remain abstinent at a 3 month follow up period. According to these results, the authors conclude that switching to e-cigarettes is not likely to prevent relapse to cigarette smoking and is in fact associated with an increased risk of relapse when compared to abstaining from tobacco products.