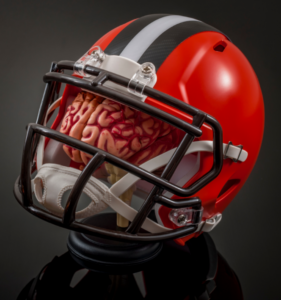 In recent years, concern over the danger of football playing a critical role in failing mental and cognitive health has grown. These concerns have stemmed from observations of former football players suffering neurodegenerative disorders such as chronic traumatic encephalopathy that lead to dementia and other neurological diseases. The results of brain injuries during football play have involved significant suffering that in many cases have led to suicide.

Though research into the link between football and brain disease has helped to establish the link, many questions remain. For instance, in 2019, a study found that football players were 5 times more likely to suffer from Alzheimer’s disease, 4 times more likely to develop motor neuron disease, and twice as likely to be diagnosed with Parkinson’s disease than those who never participated in the sport. However, the study could not pinpoint the specific factors that led to the increased incidence of brain disease amongst football players.

A new study published in Frontiers in Neurology investigated the question of whether earlier age of exposure to football correlates with worse brain health once football players reach middle or older age. For their study, the researchers studied 186 men whose average age was 52. All of the men played football in high school, and approximately half of them started playing before the age of 12. The researchers used surveys to determine when the men played football, the injuries they may have endured, and details of their physical, psychological, and cognitive status.

The results revealed that those who began playing football before the age of 12 did not differ significantly from those who began the sport at an older age in terms of ratings of depression, anxiety, anger, headaches, migraines, back pain, neck pain, chronic pain, concentration, or memory. These results suggest that age of initial participation and number of years playing football likely do not alone account for increased risk for brain disease. More research is needed for us to understand the enhanced risk that football players face and how we can best mitigate the factors increasing their risk.