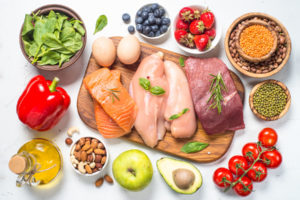 The International Food Information Council Foundation recently published results from its 2020 Food and Health Survey. The survey was conducted in April, and data from more than 1,000 adults between the ages of 18 and 80 were collected. The results show that adults in the United States have been eating more during the pandemic than they normally do.

Analyses of the collected data help to reveal some key information for physicians about the changes in eating habits, and according to the council’s director of research and nutrition communications, parents of young children are one group that appears to have clearly undergone modifications around food behaviors.

More than 40% of parents have reported snacking more frequently in recent months, whereas only 29% of adults without children said that they have snacked more during COVID-19. Whereas 41% of adults between the ages of 18 and 35 report snacking more, only 26% of those above the age of 50 reported this same trend.

Food preparation also appears to have been affected by the pandemic, with 85% of survey respondents indicating that their habits related to eating and preparing food have changed. Some of the specific behaviors that were highlighted through the survey were eating more premade meals and washing fresh foods more since the outbreak.

Sex differences also emerged as a theme in this new survey. When asked how frequently they thought about food, 31% of women said that they think about food more often than they did before COVID, whereas only 22% of men said the same. Similarly, whereas 24% of women reported actually eating more food during the outbreak, only 17% of men did.

The majority of people reported that they are still confident in the safety of the U.S. food supply, though more people in good health had this attitude than did those in fair or poor health. Thus, not all modifications to eating behaviors can be attributed to changes in perception of food safety. It is likely that the changes to daily routines, including spending more time with young children, may be contributing to increases in consumption. More data will help to clarify the role of the pandemic in eating behavior and how we can best combat unhealthy consumption.