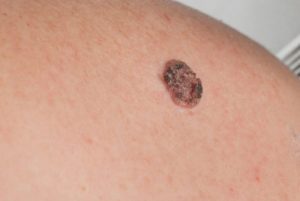 It has long been recognized that cutaneous squamous cell carcinoma (cSCC) skin cancer that involves perineural invasion is more likely to recur or metastasize than other forms of skin cancer. However, it has been debated how best to treat this type of skin cancer. Recent research, published in JAMA Dermatology, suggests that combining adjuvant radiotherapy with Mohs micrographic surgery leads to better outcomes than does the surgery alone.

For their study, the scientists studied 31 patients who were diagnosed with cSCC in New York between the years of 2005 and 2014. The average age of the study participants was just under 71 years, and men comprised about 77% of the group. Each of the patients underwent Mohs surgery, and roughly half of the patients also underwent adjuvant radiotherapy. All patients were evaluated by physicians for outcomes related to disease recurrence, metastasis, and survival.

The Mohs surgery was deemed successful in each case, with negative margins observed. During the 5-year follow-up, there was no indication of local recurrence in any of the patients. However, there were differences in outcomes for the patients who combined adjuvant radiotherapy with their surgery compared to those who underwent surgery alone.

The safety data on adjuvant radiotherapy showed that 6 patients experienced mild dermatitis as a result of the radiotherapy. However, given the better outcomes related to their skin cancer compared to those who did not receive adjuvant therapy, the authors concluded that their data support the use adjuvant radiotherapy for cSCC with perineural invasion. They also suggest that this type of treatment approach that combines surgery and adjuvant therapy should be considered for high-risk patients in particular.

Stevenson, M.L. (2020). Use of adjuvant radiotherapy in the treatment of high-risk cutaneous squamous cell carcinoma with perineural invasion. JAMA Dermatology, 156(8), 918-921.