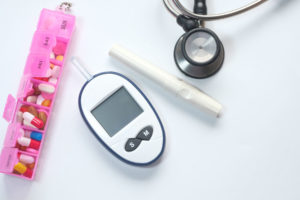 There has been mixed data on whether the use of antidepressants may increase people’s risk for developing type 2 diabetes. Whereas some meta-analyses have pointed to a potential relationship, longitudinal studies have not identified any correlation.

To investigate this issue, researchers have now analyzed relevant  data from a French cohort study that began in 1990 and included follow up questionnaires every two or three years. Information on type 2 diabetes status and exposure to antidepressants was obtained through drug reimbursement data.

An analysis of how the type of antidepressant may modify type 2 diabetes risk was also undertaken. The results showed that while women taking selective serotonin reuptake inhibitors (SSRIs) had a 1.25 fold increased risk for type 2 diabetes, those taking imipramine-type and ‘other’ or ‘mixed’ antidepressants had 1.35 fold and 1.82 fold increased risk.

Based on their results, the authors of the study suggest that glucose levels be monitored in those who are put on antidepressants. More research will likely help to clarify if and how antidepressants may affect glucose metabolism and risk for type 2 diabetes and how that risk can be effectively managed by physicians so that those who need antidepressant medication can get the treatment they need as safely as possible.