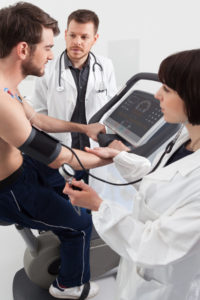 High blood pressure – or hypertension –  is a well-established risk factor for cardiovascular disease and other health challenges. A new study, published in the Journal of the American Heart Association, has revealed a way that we can use blood pressure measurements associated with exercise to predict the likelihood of developing cardiovascular disease later in life.

The authors of the study urge people to be aware of their blood pressure. In addition, in light of these recent findings, they recommend that people ask their primary care, and or hospital physicians about their blood pressure changes during and after exercise to help reduce their risk for health problems later in life.