Home > COVID-19 > Are Pregnant Women Willing to get Vaccinated for COVID-19? 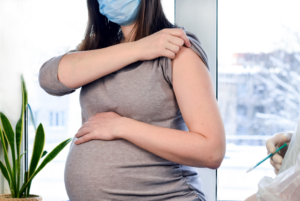 When the COVID-19 vaccinations were first authorized for emergency use, there was significant debate around whether pregnant women should receive the vaccines. With a lack of adequate data, it was difficult for physicians to advise that pregnant women pursue vaccination. With initial data suggesting that the vaccine was not leading to any serious adverse events in pregnant women or their babies, the American College of Obstetrician and Gynecologists (ACOG) and the Society for Maternal-Fetal Medicine (SMFM) recommended that pregnant women not be denied access to the vaccines.

With data now available over the course of months of vaccination and several healthy babies being born to women who received the vaccine during pregnancy, guidance has been shifting more toward recommending the vaccination for women. With the rapid change in guidance based on new data being collected and analyzed in real-time, there has understandably been confusion around the vaccines.

Researchers have been interested in attitudes toward the vaccines, and a new study published in the American Journal of Perinatology has specifically studied attitudes toward COVID-19 illness and vaccination in pregnant women. Women between the ages of 18 and 50 who were less than 28 weeks of gestation were evaluated through cross-sectional surveys administered between August and December of 2020.

Nearly 1000 pregnant women were identified, and 915 – or 97% – participated. The analysis showed that less than half of the pregnant women were willing to get vaccinated during pregnancy despite most of them being worried about COVID-19 illness. The primary reason for unwillingness to vaccinate was concern that the vaccine could be unsafe for their pregnancy.

Importantly, racial and ethnic differences in willingness to vaccinate were identified. Specifically, black women and Hispanic women were less likely to accept the vaccine than non-Hispanic white women. In addition, those who had received the flu vaccine during the prior season were more likely to accept the COVID-19 vaccine.

Now that there are more data suggesting that the COVID-19 vaccine does not adversely impact pregnant women or their babies, it is likely that more women will begin to accept vaccination. Given that the biggest driver of unwillingness to vaccinate amongst pregnant women has been concern of safety, more robust safety data could significantly impact these attitudes.