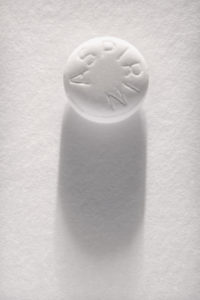 A new meta-analysis published in the Annals of Oncology has shown that regular consumption of aspirin may reduce the risk for digestive tract cancers such as colorectal cancer. While physicians have generally believed that aspirin has some protective effect against certain forms of cancer, the quantification of this risk has been unclear. Without more information on the risk reduction and the dosing that achieves these benefits, it has been difficult for physicians to act on the knowledge that there is a potential link between aspirin use and cancer risk reduction.

This new systematic meta-analysis review included evaluation of relevant observational studies published through March of 2019. The authors found that regular aspirin use reduced the risk of several digestive tract cancers, including: colorectal cancer, stomach cancer, pancreatic cancer, hepato-biliary tract cancer, squamous-cell esophageal cancer, and adenocarcinoma of the esophagus and gastric cardia. The researchers did not find an association between aspirin use and head and neck cancer.

The effects of aspirin on cancer risk appeared to be the same for men and women and for people living in geographically distinct areas. In general, the longer the use of aspirin, the lower the risk for cancer. In addition to the length of aspirin use, in the case of colorectal cancer, dose was also found to be an important factor in how much cancer risk was reduced. For colorectal cancer, it was found that between 75 and 100 milligrams per day reduced the risk of cancer by 10%, whereas 325 milligrams per day reduced the risk by 35%.

Daily aspirin therapy has long been used by hospital physicians and known to produce certain health benefits. However, there are also risks involved with taking aspirin, so understanding the specific effects of long-term aspirin use is critical to optimizing its use amongst patients. This new data point to the potential value of daily aspirin for those at risk for digestive tract cancers.