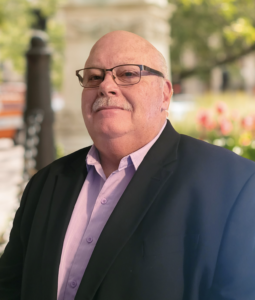 Don Kelso is the Chief Operating Officer for OPYS. He oversees all of the business and executive operations for the Company.

Having led, and established himself as a cornerstone for OPYS in his previous role of Vice President of Engagement & Opportunity, Don was a natural choice for the Chief Operating Officer position.

Don brings to OPYS a lifetime of working, living and supporting rural healthcare and the folks that live within both Indiana, and nationally. The most recent 14 years as an Indiana Rural Health Association Board Member for two years and CEO of the Indiana Rural Health Association from 2008 until 2020.  Prior to IRHA, Don severed in several hospital based administrative capacities, including Chief Operating Officer, and Daviess Community Hospital in Indiana.

Don has forged many long lasting relationships in the state of Indiana, the Midwest and across the country during his work at IRHA and rural hospitals/clinics over the past 30 years.

Don has a MBA degree, has spent his lifetime in Southwestern Indiana while enjoying his wife, 3 children and 6 grandchildren. Don enjoys playing golf and being a fan of local, state and professional sports teams.

Don looks forward to trying to improve the lives of all rural populations by improving their access to high quality and affordable healthcare and related healthcare education.